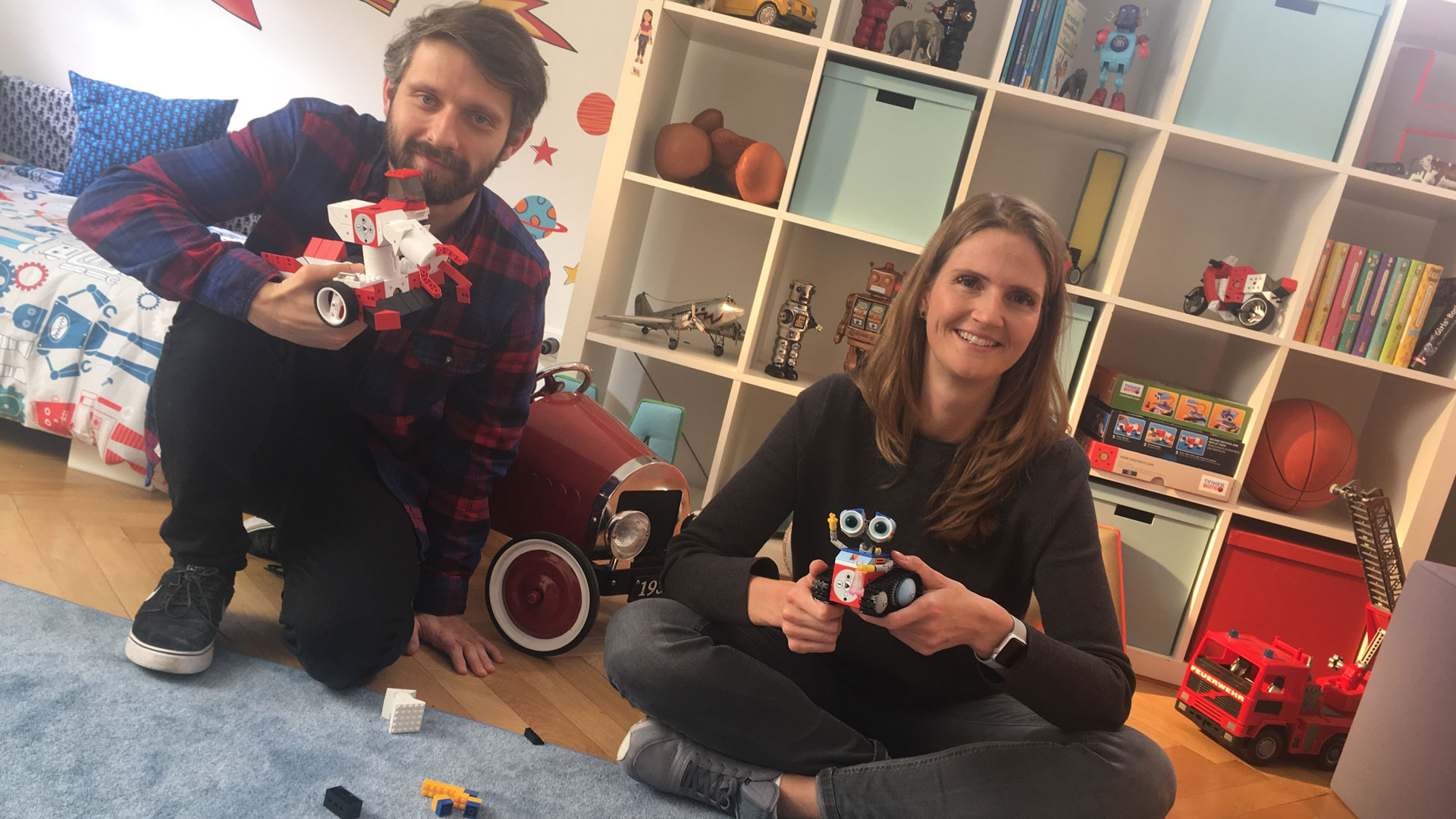 7Stories have recently finished filming the first TV spot for 2016 SevenVentures Pitch Day winners Tinkerbots. A good time for The Restless CMO to sit down with Birgit Immen and Thomas Grupp from 7Stories and Tinkerbots CEO Adrienne Fischer to discuss what makes a great spot, what both parties learned from the process, and how the colour of a child’s t-shirt can derail a filming schedule…

TRC: Congratulations on winning SevenVentures Pitch Day (7VPD) last year Adrienne! Can you tell us a little bit about your product and its background?

AF: One of our co-founders Leo produced the first prototype as part of a student project at the Bauhaus University. He had the simple aim of bringing Lego to life! Together with our other 2 co-founders he developed the product and over the years it has become the Tinkerbots we know today – a robot making set with adaptors for Lego with a “powerbrain” which controls the robot and different movement modules and sensors. All of which can be controlled via your smartphone.

TRC: The product sounds great! After you won 7VPD and the chance to make a TV spot, how did the process continue?

AF: I found out we had won 7VPD the day I started at Tinkerbots. What a great introduction! We started working with 7Stories on ideas for the spot but then actually decided to wait until 2017 to start filming - we decided that directly after we won 7VPD was a bit too early us. We had an online shop but we weren’t even in stores yet (now we are in Barnes and Noble in the US, how times have changed!). Also, we were directly in the middle of developing a new product series. We decided to wait until 2017 until that series was finished and we are so pleased we did.

TRC: Did you have your own initial ideas for the spot?

AF: Of course, you always have pictures in your own mind of what you want it to look like. But working with 7Stories was a real pleasure because we felt like they listened to us but also gave us expert advice about what would work and what wouldn’t and we were happy to take that advice.

TRC: Birgit and Thomas, perhaps now would be a good time for you to tell us what generally makes a great TV spot?

7S: Essentially it is about bringing out your core product message. This is not an easy task in just 20 seconds. You want to create that butterflies-in-stomach feeling, that emotional connection, and you also need to convey important information about the product.

We are not experts on their product so the process starts with many brainstorming meetings with the client, where we say: “Imagine you are explaining your product to a friend down the pub.” Essentially an elevator pitch for the product. The clients are the experts on their products and they are the best people to tell us what is special about them. But a great spot needs a story and we are the storytellers. We bring these messages to life.

A great spot speaks to a number of different people all at once. The spot for Tinkerbots essentially had two audiences: children of course, the ad needed to sell the product to them. But it also had to speak directly to the parents as they are the ones opening their wallets at the end of the day!

TRC: So once the basic concept for the spot was decided, how did you get from the storyboards to the final product?

7S: We started the search for actors and a location and we looked for the right camera team. We then set up the filming. The biggest challenge we had was that our Tinkerbots ad featured child actors. Children in Germany are only allowed to work a maximum of four hours per day, and when you think that in that time they need to go into costume and makeup and get to know the product, there really does not leave much time for filming!

There are of course problems that you cannot foresee until you start the filming process. For example, we had chosen the outfits for the children to wear, only on camera the colours of one T-shirt made the Tinkerbots toy he was playing with appear almost invisible! Things like this take time away from the filming process. But what worked really well was that Adrienne and Leo from Tinkerbots were on site for the entire filming process, so they could react quickly to these problems and work with us on finding the right solutions.  .

Filming a 20 second spot involves a lot of people and requires a great deal of coordination, particularly a spot involving children. We had our three actors, the children’s parents, cameraman and assistant, light technician, outfitter and assistant, producer and assistant, production chief, hair and make-up artist…all told, around 20 people to coordinate and a further 20 people involved in the organisation who were not on site for filming. And let’s not forget the Child Welfare Office who paid us regular visits!

Once filmed has finished, finalising the final version of the spot is quite easy as the storyboard has been agreed with the client beforehand. But small changes are always required like colour, light and checking the spot against certain guidelines. Getting to the final version is a very dynamic process, we are constantly gathering feedback from the client and making improvements. For the Tinkerbots ad, the entire process from the first storyboard to the final cut took around 6 weeks.

TRC: Is there anything else you need to watch out for when making a TV spot?

7S: We have to be really careful that we do exactly what we say we will with the assets we have, for example actors and music. We purchase licences from agencies who represent our actors which stipulate how long the spot can be, through which media it will be shown and in which countries. The licencing laws are extremely tight, even tighter of course when you are working with child actors. Even if your 20 second spot ends up being 5 seconds longer you will be in breach of your licence. And with TV there is no going back, once the spot is shown the material is out there. We have to be really careful with legal formalities like licences.

TRC: And how does the final spot look?

AF: The spot features two children playing in their room with Tinkerbots, one saying “my racing car robot can do this” and the other saying “well look, dog robot can do this”. Your typical sibling squabble over toys! At the end they realise their robot is being controlled by someone else, they look over and see their father is controlling the robot via his smartphone – he wants to play too! We started off initially with the idea for the children and then later decided to add the last shot with the father. It adds an extra element of cheeky humour at the end and reinforces that Tinkerbots is a toy for all the family, young and old! The spot goes live in October this year, we are so happy with it and we really look forward to people’s reactions!

7S: Yes, with the idea for the father we weren’t convinced at first: we were worried it would take us over budget or perhaps beyond our allotted filming time. But it was a great idea, and we are all really pleased we did it!

TRC: How does a creative agency like 7Stories work with a client like Tinkerbots throughout the filming and editing process?

7S: We always want to listen to the client and develop something which as best we possibly can matches the pictures they have in their mind. But naturally it also needs to work on TV. I would say the first thing we do is listen to what they want, all about their product and their ideas. We then apply our expert knowledge. If we know that from our experience a child wearing a checked shirt isn’t going to work in one particular shot, because the pattern flickers on TV, then we will speak up, advise and find a common solution with the client. The final stage of the process is a constant creative exchange with the client which is hugely important to us.

TRC: Now just going back to SevenVentures Pitch Day last year (congratulations again Tinkerbots!). What did you enjoy most about the experience? And the million-dollar question: would you recommend participation to other young companies?

AF: I would recommend it to absolutely everyone. What other opportunities are there for small startups to advertise their products on TV? When you start out companies imagine they can sell their products only via social media.  With the best will in the world, with social media you don’t reach anywhere near the number of people you do with TV advertising.

It was an absolute pleasure to be involved. We felt guided and advised at every stage. For us of course the financial prize was important, but the know-how and expertise has helped us immensely in our marketing strategy. We have learned so much.

TRC: From your experience of making your first TV spot, what would be your top tip for other startups interested in TV advertising?

AF: I think the biggest thing we learned was just how much goes into making a 20 second spot with children. That is not to put anyone off, but it made a strategic partner like 7Stories even more valuable. There are of course upsides to working with children: what we loved was that children are completely true to themselves. We saw that in the filming of the ad when the actors were playing with Tinkerbots behind the scenes. They loved it!

SevenVentures Pitch Day 2017 will take place on October 26th, 2017 at the DLD Conference in Berlin. Applications are open until October 8th, 2017 at sevenventures.de. Learn more about Tinkerbots at tinkerbots.de