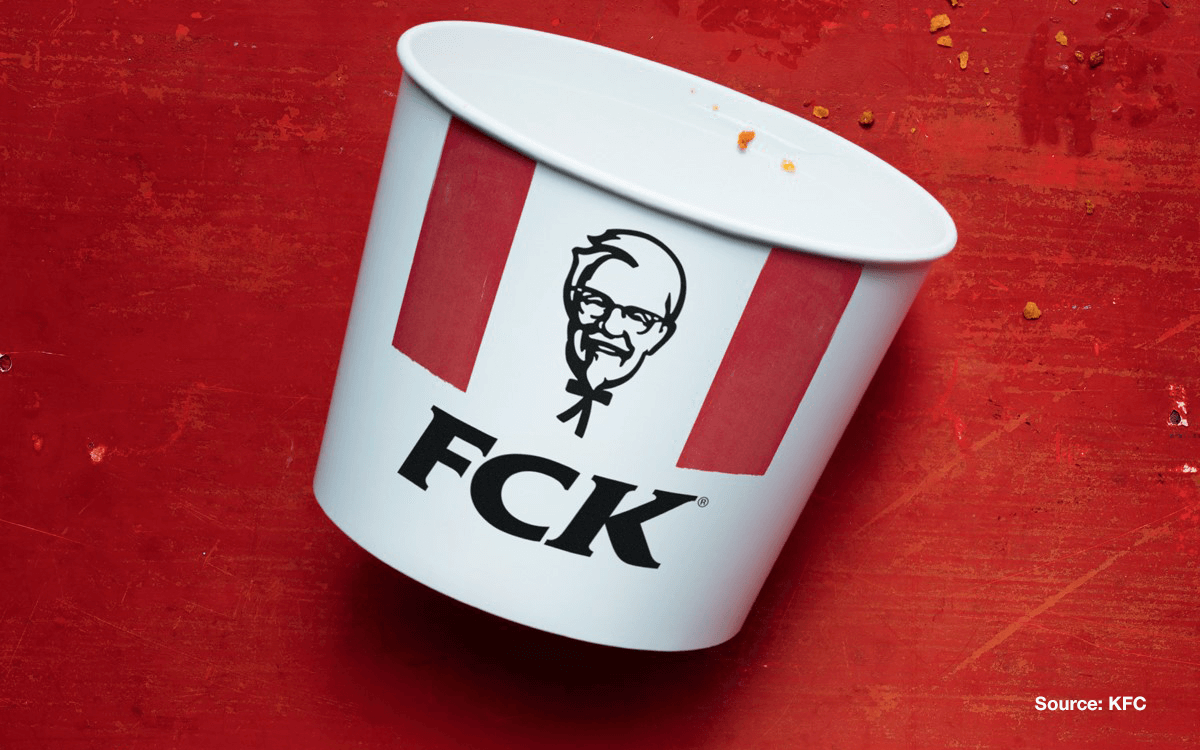 When companies are in crisis, the credo often goes: be as cautious as possible and communicate as little as possible. But sometimes brands do exactly the opposite - with a pinch of humour and success. We introduce three best practice examples and explain what startups can learn.

„Communication can’t undo a crisis – the crisis exists and you can’t make it go away. But what good crisis communication can achieve is to take charge of how events are interpreted.“ said Klaus Weise, expert and managing partner of Serviceplan PR & Content, last year in an interview with The Restless CMO. But what that means in practice is something widely debated. Is it better to go cautiously and communicate as little as possible or show up and face the public debate with confidence?

There is certainly no one-size-fits-all solution. However, the following three examples show how companies can succeed in appeasing even the harshest critics with wit and self-assurance.

The crisis: KFC had problems with its suppliers earlier this year therefore the American fast food chain had to close nearly 700 stores in the UK - to the dismay of many customers. KFC saw their anger on social networks run wild.

The response: The US chicken fryer took an unusual step:  the company apologised to its customers in the London Evening Standard with an ad showing one of its famous chicken buckets with “KFC” reorganised as "FCK". This clever move turned the public debate 180 degrees - after that it was more about the brilliant response than the actual trigger of the crisis.

The learning: Being brave can pay off. The company certainly showed courage - after all, not every brand would have dared to do this, particularly those that count families among their customers. KFC CMO Andrea Zahumensky was not initially convinced of the idea, as she explained in an interview with AdWeek.

The crisis: The Waffle House fastfood chain is largely unknown in Germany but in the US it’s an institution. Their USP: customers can create their own waffle concoctions around the clock. One night Alex Bowen went into a branch in West Columbia and was met with sleeping Waffle House employees. He quickly made himself his own midnight snack and posted his exploits on Facebook. When the post went viral, it didn’t show the restaurant in a particularly good light.

The response: Instead of publicly apologising and complaining about both the drunken intruder and  the sleeping staff, the Waffle House decided on a different path: in several public statements, the company admitted its mistake and offered Alex Bowen a job (somewhat ironically), because they found he could cook quite well. In addition, the company invited Bowen to a branch to be cooked for by the staff. In the resulting publicity a TV segment also saw a Waffle House manager offering Bowen some cooking tips.

A good dose of humour can make up for a lot. Of course this tip cannot be applied to every crisis situation, but where possible, companies should consider whether a laid-back response is better than a stiff corporate message.

The crisis: The smoothie startup True Fruits is known for its provocative communication. In 2015, the Bonn natives designed a bottle design which caused outrage particularly among women. The problematic text: "Have you ever tried to set up a girlfriend on a date who while super ugly has a great personality? That's how we feel right now with our white, probably our most delicious smoothie which, due to its pale and unfruity appearance, rarely has the joy of a rendezvous with you.” The resulting shitstorm was predictable.

The response: In their typical way, the team reacted flippantly and faced down their critics directly on social media:

"We've listened to the comments and think they are totally mind-boggling pseudo-moral apostle bullshit, and after a long laugh decided that even a hint of a serious response would be the total waste of precious life energy. Therefore, some advice to all the naysayers: if you do not like it, get lost! But save us your moaning because we totally love this humour! "

The learning: Show backbone and don’t buckle – which is well received, at least by true fans. However, such crude language and a reaction like True Fruits must fit the brand. If, for example, their closest competitor Innocent had done the same thing, it would have been somewhat less convincing.

4 businesses that don’t do social media

7 ways to turn your employees into brand influencers