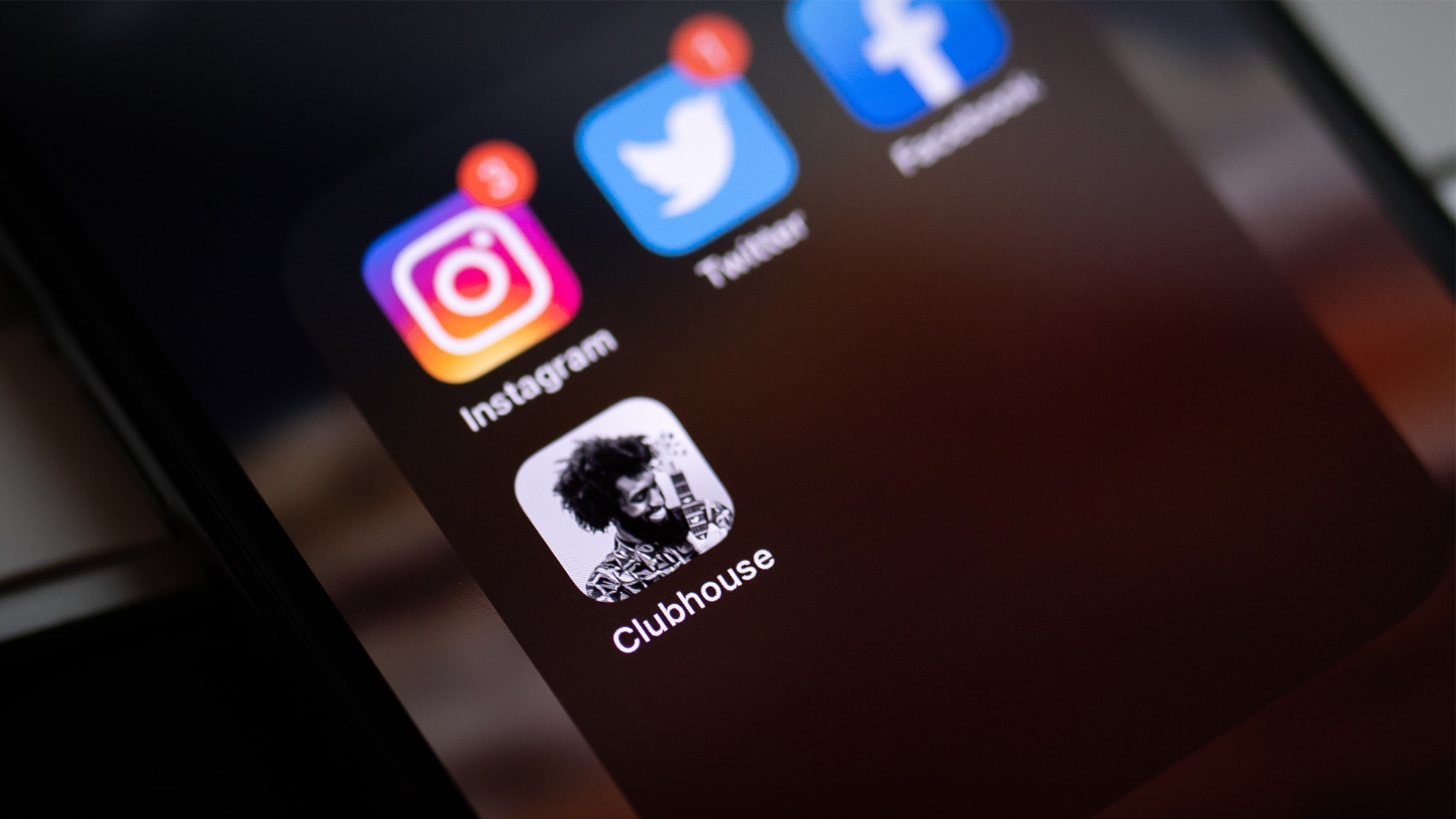 Clubhouse is the new mega trend in the social media world. Founded in Silicon Valley in March 2020, and launched in Germany in January 2021, the audio app's rise was fuelled at the start of the new year by a collective onslaught from the media, investors and politicians, as well as unexpected appearances from Elon Musk and Mark Zuckerberg. Advertisers are wondering what marketing opportunities the new audio format offers and - as with any hype - whether Clubhouse is just a short-term phenomenon or whether it will remain relevant in the long term – even after the lockdown. We take a closer look at the social audio trend.

Clubhouse is a social networking app based solely on audio chat. In the app users can create - or join - rooms and listen to interviews and discussions on various topics. Each participant in the room can also speak and take part in the discussion. The live nature of the conversations which are not recorded, as well as the invite-only access to the network, means that Clubhouse offers a certain exclusivity. This has led to an explosive increase in user numbers thanks to the "fear of missing out" effect, among other things.

Despite all the hype, Clubhouse has also been heavily criticised for its lack of data protection - and rightly so for the most part, as Lucas Florian, Director of the Digital Unit at PR agency PIABO, confirms: "The app accesses users' address books quite aggressively. But then so did LinkedIn and they have firmly established themselves on the German market - who doesn't remember the almost automatic sending of 300 'would you like to be part of my LinkedIn network?' invitations to all their contacts? Use the service, but be aware of the issues."

1 month Clubhouse - What have we learned?

In the last few weeks there has not only been a lot of talk on Clubhouse, but also about it. Now that more and more influencers and stars like Joko Winterscheidt, Caroline Daur and Mario Götze are using the platform, interest on all sides has increased enormously. This positive trend has continued, although we are still in the initial phase where public personalities as well as media and companies are testing the advantages and disadvantages of different ideas and formats on Clubhouse.

Nevertheless, there are already initial learnings - especially with regard to the public nature of the rooms, as Bodo Ramelow's famous example demonstrated. In a room with more than 1,000 people, the Minister President of Thuringia apparently felt he was in such an exclusive and protected circle that he not only referred to the Chancellor as "Merkelchen" (little Merkel), but also carelessly confessed that he likes to play Candy Crush during Corona conferences. What marketers and companies should learn from this: despite its exclusive image, Clubhouse talks are ultimately public discussion rooms in which even participating journalists can quote your every word.

There are already numerous positive examples of how companies have been able to benefit from the app - sometimes in unexpected ways. For example, an entrepreneur who sells natural cosmetics introduced herself in PIABO founder Tilo Bonow's regular talk entitled "What do you do? Who are you?" and immediately received several requests to speak from interested parties who were excited about her products. She then went to her website and created a voucher code "CLUBHOUSE20" for a 20 percent discount, which she made available to the Clubhouse. The result: the next day, she had made a handsome sum in sales.

Although Clubhouse has only been successful in Germany for a short time, the media agency OMD conducted an online survey in January 2021 to delve deeper into the hype. According to the survey, around a third of Germans aged 18 to 29 said they had already heard of the app. This figure decreases as those surveyed get older, for example only around 16 percent of 50 to 59-year-olds had already heard of Clubhouse at the time of the survey. However, the focus on the age group between 18 and 29 also means that, compared to other social media platforms such as Instagram or TikTok, the app by no means targets only the very young. That the app attracts an older target group should therefore interest brands that target a professional and corporate audience.

The market research start-up Civey has also published a study on Clubhouse. Clubhouse expert Lucas Florian highlights the results of the interest groups in particular: "Innovation comes in fourth place when it comes to topics Clubhouse users are interested in, even ahead of entertainment and sports which are usually far ahead on other social networks. Clubhouse is currently leading the way when it comes to innovation topics.”

What marketing opportunities does Clubhouse offer?

Clubhouse does not currently offer in-app advertising features as it is focusing on the growth and usability of the platform. However, this focus will change in the near future, as a "Creator Grant Programme" is currently in development, testing new features that will allow creators to make a name for themselves and generate added value, similar to TikTok or YouTube. Nevertheless, there are already many ways in which companies can launch their first marketing activities on Clubhouse. Because the app relies purely on audio there are obvious parallels with the podcast format.

Like with podcasts, individual rooms on Clubhouse can be sponsored by companies. For example, the title of a room could include "Presented by Company X" or the moderator could read a short sponsor announcement or a shout-out every 30 minutes as a midroll ad. The latter makes more sense in Clubhouse than an announcement at the very beginning of the conversation because due to the drop-in character of the rooms it is rare that all participants are present right at the beginning. The appropriate thematic reference is also important - for example, Lufthansa or the Hilton hotel group could sponsor a discussion about tourism aimed at premium travellers.

In addition, companies can also become active on Clubhouse and organise their own rooms. Just like when a company establishes its own podcast, it must first be clear about which experts will feature, what added value it can create for its target group in terms of content and what strategy it wants to use to establish regular contact with its audience. Since the platform is entirely based on the exchange of thoughts, ideas and opinions, there are excellent opportunities here to present thought leadership as a personal brand or company and therefore benefit, especially in the B2B sector and recruiting. According to Lucas Florian, it is not even necessary to set up your own rooms or formats: "For example, an IT company could simply send its in-house experts on certain specialist topics into a room where these topics are discussed. They then speak up, make a helpful contribution to the discussion and then briefly introduce themselves and their company. The targeted audience has then not only heard the name of the company, but immediately associates it with the expertise of the speaker".

Even though Clubhouse, like LinkedIn, is mainly used as a professional social network with a focus on digital, political and business topics, it offers B2C advertising opportunities that will no doubt be expanded significantly in the future. This is because the range of topics discussed in the rooms is ultimately unlimited and already ranges from art & literature to sports to beauty and fashion. Accordingly, there are a number of creative ideas companies can adopt to place products in the rooms and conversations. What is important here is the added value for the audience. For example, beauty influencers could discuss new fashion trends or the inspiration behind a collection and at the same time respond to direct feedback from fans.

The question remains - how will Clubhouse develop in the coming months and years and does the current enthusiasm have staying power? The lockdown and the need for a new activity and direct interaction from home may have played a role in the success of the social audio app. What will happen when people can meet up with each other personally instead of only digitally?

We believe that Clubhouse has the potential for success even after the lockdown ends. And not only because of the recent Series B funding round led by influential venture capital firm Andreessen Horowitz which saw the valuation of the company upgraded to $1 billion. The general trend towards immediate live communication via social platforms, driven for several years by Twitch, among others, also points to a promising future. Meanwhile, the competition has also recognised its potential and is already trying to copy Clubhouse. Twitter, for example, is currently testing a product called Spaces which offers an audio chat function, and Facebook is also said to have instructed its employees to develop a similar feature. "Twitter has been very quick to respond to the new trend, while Facebook is still lagging behind. So the importance of getting a good product is not to be underestimated for Facebook. We still have a fierce battle ahead of us here," says Lucas Florian.

Social media is changing. Here’s how.