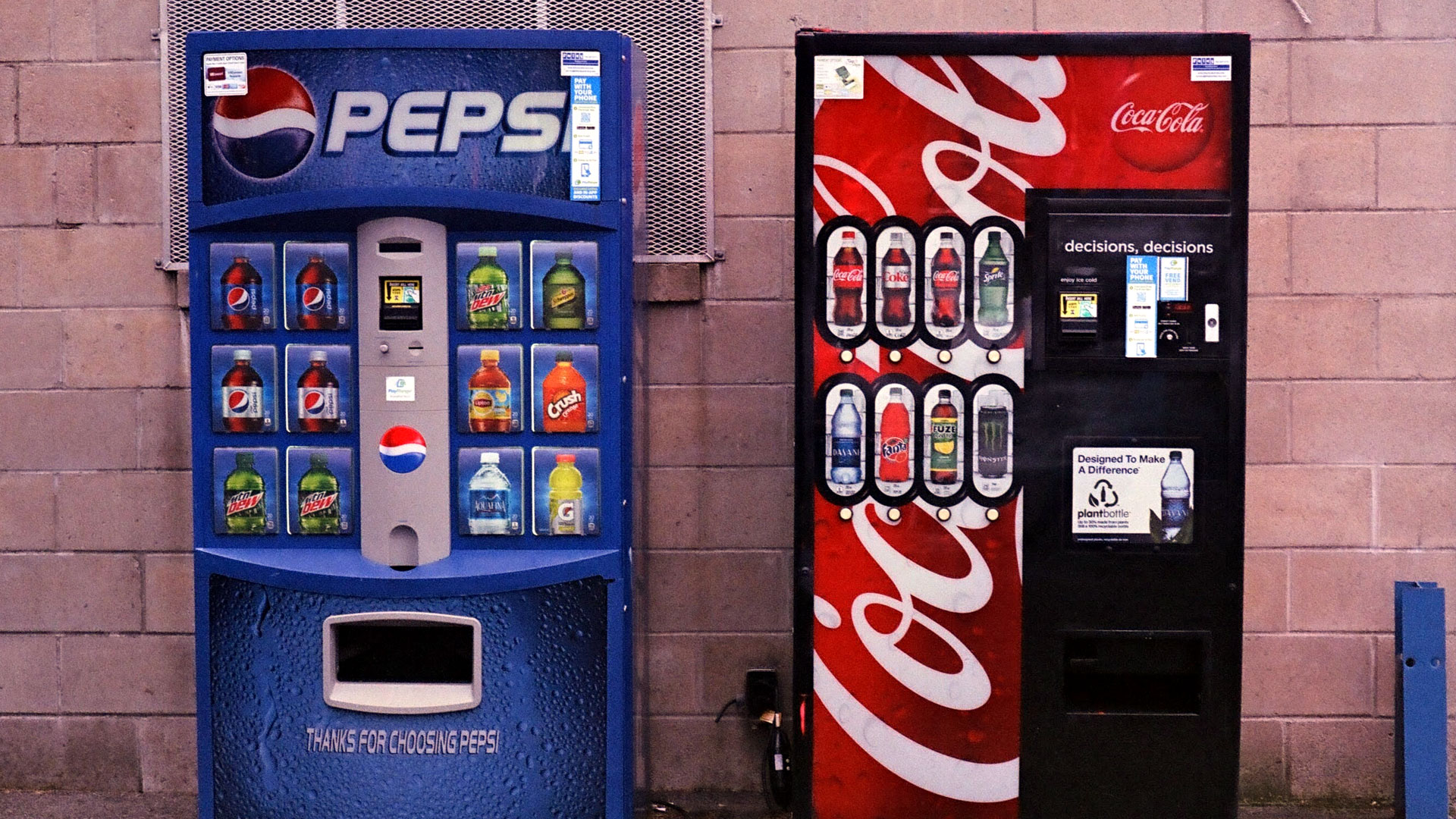 Coke vs. Pepsi, Samsung vs. Apple, McDonalds vs. Burger King – marketing history is full of legendary brand rivalries. If actively and cleverly executed, both opponents can ultimately profit from a public duel. We take a look at famous examples of why brands should seek rather than avoid an open exchange with their rivals.

"Keep your friends close and your enemies closer", said Al Pacino as Don Michael Corleone in The Godfather 2. Wise words which also apply to brand marketing. First and foremost, brands should pay constant attention to what the competition is doing. This helps them to avoid resting on past successes and keeps them fighting for their customers’ favour with new ideas. No rivalry over the years has demonstrated this as impressively as the one between beverage brands Coca-Cola and Pepsi. Now commonly known as the "Cola War", the duel between the two brands began as early as the beginning of the 20th century, when Coke was already established on the market and faced a challenge from newcomer Pepsi.

The rivalry forced both brands to rely on new and innovative marketing techniques and strategies at an early stage. Coke adopted actress Hilda Clark as its first celebrity testimonial as early as 1900 and depicted her on tin trays as an early form of practical product advertising. With these and other collaborations with well-known baseball players, among others, it initially looked like an easy win for Coke, especially as the company expanded internationally over the next few decades and the sugar rationing of World War I drove Pepsi into bankruptcy in 1923. During the 1930s, however, Pepsi came back with a new focus on value and affordability, winning over many customers with a particularly low price of just five cents a bottle.

Over the following decades the increasingly fierce competition spurred both brands on to new ideas and creative activities. In 1939, for example, Pepsi created the first ever advertising jingle with the song "Pepsi-Cola Hits the Spot" with more than one million copies placed in jukeboxes throughout the USA. In the 1950s, both brands were among the first to use television as a creative medium to reach the mass market. A decade later, both Coke and Pepsi expanded their respective product portfolios, with Coke introducing Sprite as a spin-off product in 1961 and Pepsi offering its health-conscious customers a sugar-free option with Diet Pepsi. The mutual inspirations and the eternally rivalrous relationship have ultimately led to both companies becoming two of the best-known and most successful modern brands.

Set yourself apart from your rivals

A healthy brand rivalry can also help to set a company apart from its competition. A good example of this is Samsung's marketing strategy with respect to its biggest competitor in the smartphone segment, Apple. When Samsung had to come up with a strategy for the fledgling smartphone market in 2011, the marketing department quickly realised through focus groups and surveys that there was a growing divide in the customer base: between those who used Apple's iPhones and those who used smartphones from HTC, Samsung and Nokia that ran Google's fast-growing open-source Android operating system. The goal was clear: Samsung wanted to become the leading brand in the Android camp, differentiating itself above all from Apple.

At the time, Apple benefited from the cult of Steve Jobs, had a passionate fan base and exuberant media coverage. Samsung's marketing experts, however, managed to exploit this very hype for themselves by portraying it as exaggerated and dubious, while presenting Samsung's smartphones as the more practical and smarter option. Such as in the Samsung commercial "The Next Big Thing": although no names are mentioned, the cult following queuing up to grab the latest Apple device is unmistakable. Samsung's smartphones, on the other hand, represent the company's unpretentious focus on real added value.

While the duel between Samsung and Apple is a good example of contrasting brand profiling, several lawsuits and court cases over patents have led to a negative relationship between the two top brands. The good natured rivalry between the fast-food chains McDonald's and Burger King on the other hand shows that things can be different. While both brands have been in direct competition with each other since the 1970s, their public exchange of blows has been increasingly characterised by tongue-in-cheek humour, especially in recent years.

One of the most recent examples of this can be found in Belgium. In 2019 McDonald's decided to put up a large billboard right next to a new Burger King restaurant with the question "Served by a king, or served as a king?". Burger King, in turn, was quick to respond with a huge sign on its restaurant window cheekily mocking its rival's cooking method with the words "Why try to roast when you can't even flame grill?". Another humorous clash occurred in France in 2016 when McDonald's put up directional billboards to show its wide presence in the country, successfully mocking its rival in the process. They put up a tall billboard right next to their own signage indicating that the nearest Burger King was about 258 km away. In response, Burger King launched a commercial only a short time later where a couple orders a large coffee from McDonald's to take with them on the long drive to Burger King.

Conclusion: Brand rivalry does not always have to mean enmity. After all, aggressive marketing can leave a bitter aftertaste, not only between competitors but also with the public. Creative and humorous side-swipes, on the other hand, can generate attention in the media and among customers and ultimately place both brands in a positive light.

While these American brands have been fighting their battles in the public eye for decades, German companies have only recently started doing this. There are two reasons for this - it has only been permitted to make an opponent's offer recognisable in German advertising since the turn of the millennium and the digital world now offers many new opportunities for German brands to creatively implement rival content marketing. For example, in 2017 car rental company Sixt reinterpreted well-known advertising slogans from brands such as Schwarzkopf, Ritter Sport and Nestlé (After Eight) on Twitter and Facebook so that they would react and promote their own product at the same time. In response to the question "Hey @RITTER_SPORT_DE, who needs square chocolate when you can have 300 horsepower?", Ritter Sport glibly tweeted back: "Who needs 300 horsepower when chocolate can rev you up?"

However, Lidl and Edeka have been waging the biggest and most media-effective German brand war for two years now. After both supermarkets had to share the title for the best fruit and vegetable department at the Retail Awards 2017, a humorous battle ensued with regular jibes and provocations. The most elaborate action here was the spot "Li Dl-Land", with which Lidl parodies the musical film "La La Land" and features the granddaughter of the Edeka founder as the protagonist who fights to be allowed to work at Lidl. Lidl has now even launched an entire campaign based on the Edeka "Supergeil" campaign with the "Supergünstig" clips.

All these examples show that a targeted yet light-hearted brand rivalry offers great potential. Regardless of industry, it always offers excellent material for good storytelling - and those who keep their actions light-heartedly provocative without drifting into the offensive will entertain and raise awareness of their brand.

Sonic Branding: Why Your Company Needs It